The new hatch lock conceals the bulk of the brass barrel bolt and makes it stronger. It also can’t be reached from the bridge-deck.

One of the things I have not liked about my boat is I have no way to lock the companionway from the inside.  It’s an odd thing when you think about it.  When I rebuilt the boat, though I made a lot of changes, I kept the basic design of the original companionway intact. This is an important capability when you are sleeping on the boat and you can’t lock the “front door” so to speak. You are therefore vulnerable. I heard about more than just a few boats getting boarded at night when I was sailing in the West Indies.

Most locks won’t keep a determined person from getting into my boat…or anyboat for that matter.  But, a string lock can buy me enough time to implement actions and make it costly for someone to force their way below when I am aboard. So, what to do about that latch?

The easy solution is to attach a barrel bolt to the top drop board oriented vertically to lock into the sliding hatch. But, then I couldn’t easily stack the drop boards for storage as one of them would have the barrel bolt attached to it. I have a special place just to store them and they have to stack flat. Plus, with a barrel bolt on the back of a board they would get marred.

I could attach a barrel bolt to the aft end of the companionway frame on the side, also oriented vertically, to latch the companionway. But, with a ventilated drop board the latch could be opened from the outside by reaching through. Plus, the latch would be right there where you enter and exit. It would snag on things and also be unsightly.

I have actually been thinking about this for a long time. While in the W’Indies I just slept with the boat unlocked and kept my M4 assault rifle under the pillow. Relax…just kidding…no guns on the Far Reach.

My buddy Steve, who welded the bronze bulwark bracket for me, is currently welding drop-in security bars out of 3/8” SS 316 rod. It will take the place of the bottom two drop boards when it’s employed. The top board will remain in its normal installed position keeping the bars in place. The bars allows the breeze to pass through the boat. Security bars are a part of the solution. But, I still needed a latch to lock the companionway slide in place. And it needed to be out of reach of anyone on the bridge-deck.

I have a very nice and stout brass barrel lock with a 3/8” diameter barrel. I purchased it a long time ago from White Chapel Hardware and it’s been sitting in a box on my work bench ever since. I’ve known for a long time it was likely part of the solution but I didn’t know how.  I didn’t just want to screw it into the companionway frame…it would look like I just screwed it in to the companionway frame. There is no art in that…no elegance…no challenge.

The solution. I made a teak frame for the barrel bolt to make it stronger, keep it out of the way, and make it less noticeable. There are four parts. The brass barrel bolt, the base, and two side plates.

I used scrap teak for the project.  The flange is set down into a recess that I cut with a router.

The base is routered to allow the flange of the barrel bolt to sit in it flush. The two cover plates bolt through the base with (4) #10×1.5” long bronze slotted flathead woods screws. The teak frame basically sandwiches the barrel bolt between them, hiding the bulk of the hardware in the process. It’s very strong. To allow the whole thing to lock together I had to file slots out of the forward plate to create recesses for the bolt handle to rotate into and make the barrel bolt work properly.

I made grooved recesses for the knob-handle which was necessary to make the design work properly.

I cut a 5° bevel on the forward side of the barrel bolt frame to allow it to fit perfectly into the forward starboard corner of the teak companionway  hatch frame assembly.

The bolt part of the hardware plunges into a round receiver I milled from scrap of Ipé (from the ironwood family). I used a 1 3/4” foster bit to drill out a recessed cup on the underside of the sliding hatch for the ipé to fit into. I used thickened epoxy to secure it in place. 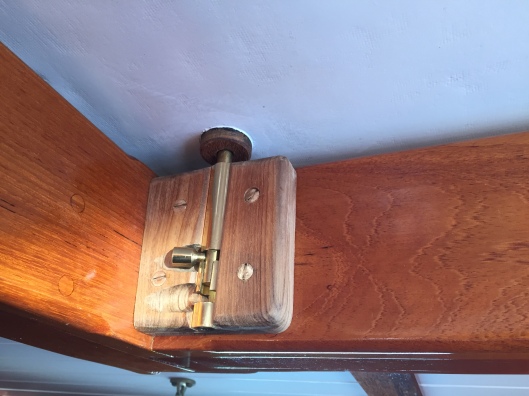 I may varnish the teak at some point but for now I will leave it bare.

At some point I may varnish it, but for now I left it bare.  So far, I am satisfied with the latch. Its strong. It’s out of the way on the forward end of the companionway frame. It can’t be reached from the bridge deck. It blends in well and is mostly not noticed. It meets most of requirements of what I like to call “simple elegance.”

1 thought on “An Inside Lock for the Companionway Hatch”