This past week I’ve been working on several projects.

I went back up the mast and switched the clevis pin around as suggested to eliminate the jib halyard chafing problem. I think it’s unlikely that is the issue but in the spirt of eliminating all possibilities, I took on board the suggestion, so to speak. I had a long conversation with my friend Robert Quates, who built my mast, as we discussed the chafing solution. We made sketches and discussed the pros and cons. I think we have a good plan. He is working on he part now and I hope to have it soon. I am confident it will solve the problem. Also, I should be able to install it with the mast in the boat. 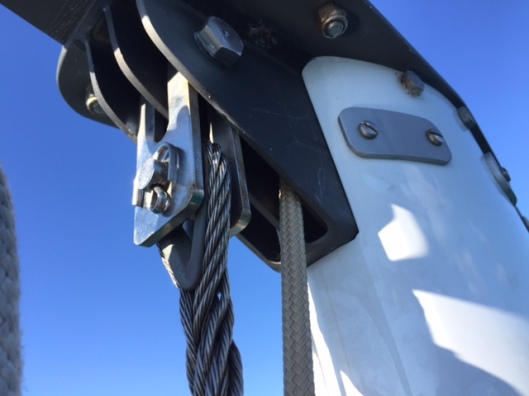 I reversed the clevis pin so the cotter pin is shielded from the jib halyard.

While I was in the climbing seat and up the mast I ran the 1/4″ halyard through the blocks I previously installed on the port spreader. During the voyage from NC, we hoisted the radar reflector on the flag halyard on the starboard spreader as that was the only flag halyard I had time to install before we set off on our trip. The problem was that there was only one block so the darn halyard was chafing on the reflector. Also, I had to take the reflector down to fly the Q flag and then the host country flag. By rigging two blocks there is no chance for halyard chafe on the reflector.

I installed two blocks on the port spreader to give space for the radar reflector so it won’t chafe on the flag halyard.

The chafing issue for the radar reflector should be solved.

Last week I ran the messenger line for the halyard that chaffed through on the voyage from NC. Today, I pulled the halyard through. I also spliced up a couple of dyneema toggle shackles I learned from my friend Ben Zartman. I made the toggles from ipe before I left. The line was easy to splice. These shackles are very strong. They will probably pull about 4000-4500 lbs. I used 3/16 Amstel Blue Dyneema for the line.

The toggle shackle takes about 15 minutes to make, not including the time spent to hand shape the ipe toggle of course.

The toggle shackles are incredibly strong.  The one disadvantage is you can’t open them with one hand like you can with a metal snap shackle.  I still have a few snap-shackles here and there.

I soldered a 1/8″ mono Jack to a random length 14 gauge wire to make using my Sony SW7600GR portable HF receiver a little more convenient. Hopefully it will eliminate the need to use the telescopic antenna and the little wire we hook on to it. I always hear Chris Parker just fine on 8137 kilohertz but the telescopic antenna is inconvenient. I also picked up some parts to make a dipole, as described by James Baldwin, at some point. I am familiar with the dipole antenna for HF as we used them extensively in the reconnaissance units I served in for so many years.

I picked up a short length of chain to secure the 9.9 Honda HT on the rotating arm bracket in an effort to deter its misappropriation as I sail further south. Keep honest men honest, as it were.

I mailed the quarter berth cushions home to free up some space to store the 9’6″ inflatable when sailing offshore. I refuse to give up the space where the inboard was to store the inflatable. That space is just too darn convenient for storing sails, tools, water jugs, and other items I am always in need of getting to with minimal inconvenience.

I have also taken the time to enjoy the beauty that is here, right around me.

St Thomas, despite its status as a busy port, can be quite beautiful.

I am ready to make the leap across to the leeward islands but the wind has been uncharacteristically light this week. So, I am prepping while I have the time.