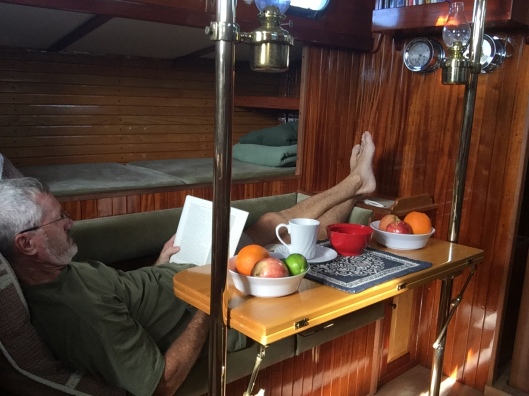 The Far Reach has proven to be wonderfully comfortable during extended live aboard.

For the last month or so it’s been pretty easy living. The Far Reach and I have mostly remained here in Elephant Bay, St Thomas until Gayle could join us.  The pace of living has been slow and relaxed. There has been plenty of time to read, sleep, swim, eat, study the sky, think, and meet new people.

My friend Rick Loucks flew down to St Thomas in early January and spent a week aboard the FR.  Rick and I served together in the Marines three times during our careers to include six months as combat advisors to the Iraqi 7th Infantry Division. We had a grand time sailing together and circumnavigating St John’s Island.

Rick is new to sailing but proved to be an enthusiastic and quick learner, as I knew he would be. We anchored overnight at a couple different spots during the week. We short-tacked through several narrow channels and ran down a 38’-40’ yawl in a heavy air tacking duel up the Drake Channel in about 25-30 Kts of wind. We spent a night in Coral Bay which still showed the terrible scars of Hurricanes Irma and Marie.

We had a nice wing and wing run along the south coast of St John’s back to St Thomas.  We solved most of the worlds problems over some great food, wine, and a just a few Pain Killers.

Rick proved to be a fast learner and a natural sailor.  We had a great time circumnavigating St John Island.

I was loaned a mooring in St Thomas by a friend I met the last time here. Sadly, he lost his much loved 37’ sloop during Irma. I only had to inspect the mooring then spend a hard four hours splicing a heavy duty thimble into a used and very tight 1” three strand nylon riser. I made the splice while sitting on the sole of the Sweet Pea under a very hot sun. It was a much more challenging splice than I anticipated, due to the fact the riser was old and had been under enormous strain. I was beat by the time it was completed.

I incorporated my US made swivel and shackles, from my parachute drogue, into the new 20’ long pendant. They will go with me when we depart St Thomas.

My friend Tracy loaned me his mooring in Elephant Bay. I spliced up a 20’ pendant to attach to the mooring riser.  Most of the hardware I had on board to include US made shackles and swivel.

I made about half dozen splices in new lines for my friend Ed Baffkin who has been very kind to me. He is a world class baker and is well known in the area for the fantastic bread he bakes on his 30’ sloop Christina. Look for an article about him in Cruising World Magazine in the near future.

Ed makes all kinds of bread but his specialty is sourdough.

Ed made this delicious cake for me to give to Gayle on Valentine’s Day.

I have made friends with a great group of local live-aboard sailors (perhaps more like sea gypsies in the best sense of the word). All  of these sailors have already lived a life worthy of a best seller. And they are still adventuring with zeal.

I also continue to meet many interesting cruisers that are passing through St Thomas. They all have had great stories about how they started sailing, met their partners, where they’ve been, and where they hope still to go. It’s been personally enriching to hear about their experiences.

As a US Navy trained SCUBA Diver (I also earned a PADI card when I was 17yrs old) and Marine Corps trained Combatant Diver I felt it was time to possess a minimal SCUBA capability on the Far Reach. So, I put together a SCUBA hookah that will allow me to clean the bottom of the Far Reach with a less strenuous effort than required by free diving.

I don’t have a SCUBA tank and for now plan only to rent one when needed. If the capability proves its worth I might pick up a tank at some point. But, I’d rather have less gear than more gear. 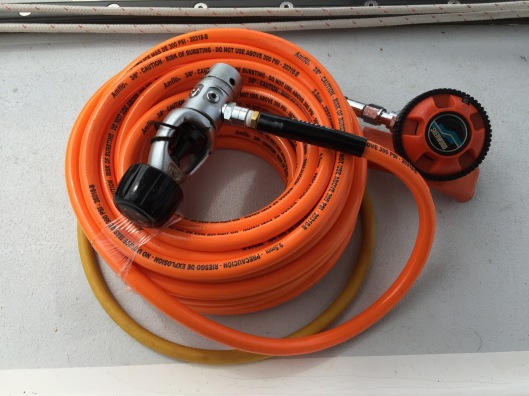 The SCUBA hookah I put together for scrubbing the bottom of the Far Reach.

I went SCUBA diving with Shaun Kadison who taught me how to snare lobster. She lives on a Sterret Jinkins 45, is a marine biologist at the University of the Virgin Islands, and is a supremely talented and fascinating person.

Boat projects and maintenance on the Far Reach have been practically nil. Her minimal and simple systems are paying off. So many of my fellow cruisers are ensnared by major projects. The big culprits are auto pilots, refrigeration, engines, and electric windlasses.

I spent a morning sewing up big screens for the deck hatches.  So far we have had no need for them, “knock wood.”

I spent a day or so working on three small but important tasks. The first was to rethink how I want to hoist and route the sheets for the storm trys’l. I spent a few hours one day raising the trysail and rethinking the best approach.

I spent some time rethinking how to better rig and employ the storm trys’l.

With that worked out I moved on to the second task—replacing the remaining cotter pins in the turnbuckles with 3/32” silicon bronze welding rods. The rods are installed in such a way as to conceal the ends so they can’t snag sails or sheets yet they lock the turnbuckles in place. It’s a clever technique I learned from Brion Toss.  The third task was to retune and retension the rig slightly.  It was a simple process that only took a few hours.

I have also continued to read everyday.  I have read two wonderful books this trip. The first is Ian Toll’s well written history of the birth of the US Navy as told through the building and operational employment of the nations first six frigates which concludes with the end of the war of 1812.  Six Frigates is interesting and well researched. Tough, skilled courageous sailors who demonstrated incredible feats of seamanship in the age of sail. Ferocious close combat.  Intense political intrigue.  Many close calls diplomatically, politically, economically, militarily.  Human behavior is unchanging…there is a lot to learn that applies even today..

“Six Flags” is a great history of the birth of the US Navy.

The second book is Sterling Hayden’s  novel “Voyage” written in 1976. It’s the story of a square rigger hauling a load of coal from New England to San Francisco via Cape Horn in 1896 by an experienced aggressive skipper, a murderous first mate, and a crew of salty foremast Jacks who are on the verge of a mutiny.  Hayden was a very accomplished schoonerman before he became a famous actor and writer. The prose is astonishingly well written. Full of great action and deep characters.  If you have read his classic autobiography “Wanderer” and enjoyed it, you’re certain to also enjoy “Voyage.”

The big news is Gayle has finally joined me on the Far Reach. She has carried a huge load at home while I sailed south to the tropics. This is the most time Gayle and I have been alone together since the kids were born 19 years ago. She is a world class companion and we are having a great time on the Far Reach. Our planning and efforts to create and build a simple yet elegant sailing machine for two are being realized more every day. 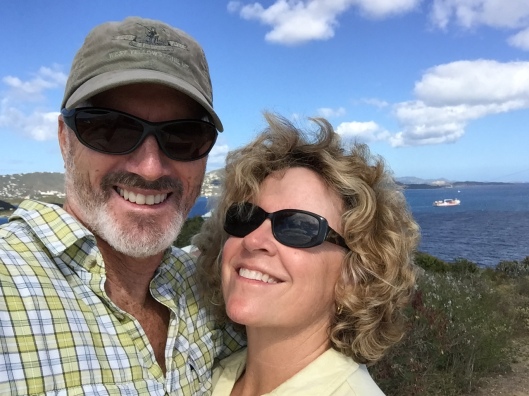 Gayle and I are having a great time together on the Far Reach.