One of the projects we completed when we originally launched the boat, in the early summer of 2015,  after the six year rebuild was to install chafing guards on the bowsprit to protect it from the stowed anchor banging in to it.  I simply glued leather patches to the bowsprit and then used copper tacks to secure copper flashing to the leather and the bowsprit.  You can read about it here in the daily log under the 17 Nov 2015 entry.

Two things occurred that necessitated I install new chafing guards.  The first is that while the guards were simple to install and perfectly protected the sprit from the banging anchor, driving copper tacks into the doug fir bowsprit allowed some minor water intrusion into the sprit.  Perhaps I simply did not caulk it well. The second is I purchased a larger Spade anchor so the guards needed to be a little larger and moved a bit to protect the bowsprit from the new anchor.

A comment about the Spade anchor might be useful.  I was very happy with our 15 kg (33 lb) Spade.  It was a great anchor.  So great that I decided to get another Spade just the next size larger.  Why is that you might ask.  Well, when you are engine free and anchored in crowded anchorages where it sometimes blows 30-35 knots for days on end you start thinking about the anchor.  “Is it big enough?”  “Man it’s dark out there.”  “That boat sure is close behind us.”  “I hope this anchor is big enough.”  And you start to get anxious about it.   So, when I returned home I decided to purchase a 20 kg (44 lb) Spade model 100.  It is rated for boats to 52′ and about 26,500 lb displacements, more than adequate for our 36′ and 18,500 lb full load displacement.  I added the 33 lb Spade to my anchor locker (in a secure rack) which gives us a 44 lb Spade as the primary anchor, a 33 lb Spade as a back up, a 35 lb CQR as a second back up, a 70 lb Luke storm anchor, and a Danforth HT 14 for a kedge.

When I removed the bow sprit this past year and saw the minor water intrusion around some of the tacks I decided to mold an epoxy base to the bowsprit where I wanted the new guards to be located.  I determined the location by mounting the new anchor on the roller in my shop.  I used two layers of biaxial which I laid over sheet plastic on the bowsprit.  After the epoxy cured I trimmed it to fit and drilled holes through the base and into the sprit.  I then drilled out the holes and filled them with epoxy and tapped the holes to take a 10-28 bronze machine screw.  When it came time to mount the new chafing guards I used contact cement to glue a layer of leather to the epoxy base.  I then glued copper flashing to the leather and installed the new guards using Dolphinite bedding compound to protect the wood from water.  But the bottom line is with the machine screws going into threaded holes in 1/2″ epoxy plugs there is little chance water will get access to the wood.  I like the copper flashing as it looks great on a traditional bowsprit but incorporates modern epoxy as an impact resistant foundation.  Now we have better, tougher chafing guards and a bigger better anchor. 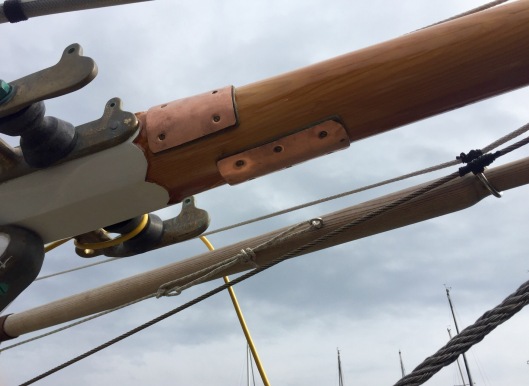 Over time the copper will acquire a lovely green patina. They will also better protect the douglas fir bowsprit from the sharp edges of the anchor.