A couple days ago I completed the installation of the halyard diverter.

The halyard diverted is installed.  It should keep the halyard lined up with the sheave and eliminate the chafe.

The day before the installation, I pulled both jib halyards out of the mast replacing them with messenger lines on. I did not want the halyards to get covered with metal shaving from the drilling at the top of the mast.

The next morning I got an early start and went up the mast to install the part and the headstay was in the way of the drill–couldn’t fit the drill between mast and headstay. I should have seen that earlier but I just looked right past it. Anyway, I hauled up a spectra line and tied it to the spinnaker bail then went down the mast and slacked the headstay and back stay and bob stay. Tied the block and tackle on the the spectra line and hauled it tight. Went back up the mast and removed the headstay at the tang and lowered it a couple feet on a line and tied it off to the top of the cap shroud. Then installed the part. I used some double sided carpet tape to hold the part in place, drilled and tapped five holes which did not take long–maybe 20-25 minutes, ran the fasters home with tef-gel, and “Bob’s your uncle.” The part lined up perfectly.

Robert Quates built a beautiful part and sent me a very thoughtful and complete installation “package.” Even a cave-man could have installed it as the saying goes or perhaps I should say even a “Grunt” could install it. He is a hell of a craftsman and a great friend.

Sitting in the climbing seat I had the hammer and drilled tied on with lanyards, as I always do when working aloft. But, somehow, unbeknownst to me, the damn drill lanyard came untied. Of course, the drill fell all the way to the deck. I watched it go down with a slow spin to the right–“oh shi#! It’s going to land in the water!” But no, the wind was so strong it landed 10′-12′ aft of the mast on its side between the primary winch and the bulwark, about a 12″ wide space! I watched it bounce up in the air about a foot and a half–“Crap, it’s going to go up and over the bulwark and then go into the water. But wait . . . No!” It settled back down where first landed. Did not break the drill. Did not even break the bit still in the chuck. Did not damage the deck. A 45′ fall in a 20 knot wind onto a fiberglass deck. Unbelievable.

Went back down the mast and retightened the headstay, backstay, bobstay. I forgot to take a picture. Went back up mast and took a picture for Robert.

Since I had the climbing gear out I went straight to work on the port lowered spreader. It was about 2″ lower at the tip then the starboard spreader. Had to make three or four trips up and down the mast but just to the lower spreader. It was a good thing I had a short climb though as I could feel the fatigue starting to set in–climbing up and down the mast, being out in the sun, not drinking enough water, and spending a fair amount of time up in the stiff breeze. It took awhile. Had to slack the port and starboard cap and intermediates. Reposition the spreader, retighten the rig, etc. It looks better now.

Anyway, I finally finished up around 1700. I was beat. I went over to Little Jerusalem (a restaurant near the lagoon in St Maarten) and bought an $8 Schwarma and cold Arizona Iced Tea. I was wiped out. I drank about a gallon and a half of water and was still dehydrated.

Hopefully, this will address the halyard chafe. As soon as possible I will sea trial the new part. In the meantime, I continue working on a list of small projects and enjoying the tropical life.  Hurricane season is fast approaching so my departure from St Maarten is not far away. 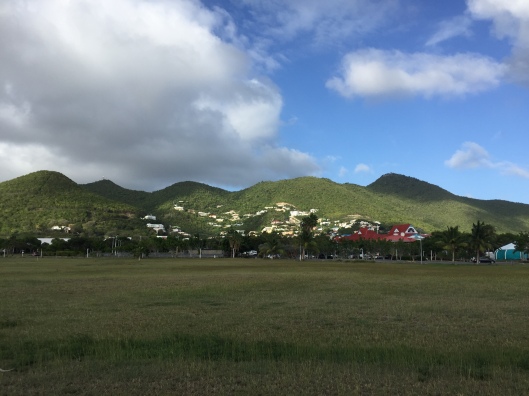 We have had a fair amount of rain in the last two weeks and St Maarten has greened up considerable.