My number one priority is to get the chafing halyard under control. To do that I needed to get back up the mast and confirm exactly where the chafing is taking place. The anchorage in Simpson Bay was very rolly. So, last Monday morning, I weighed anchor about 0900 and got in a line of boats to make the 0930 opening of the Simpson Bay draw bridge. We made it through easily and without fuss and anchored in the still lagoon, on the Dutch side, in about 7-8 of water.  I climbed the mast the next evening when the wind had completely died. Flat as a mill pond.  A fellow cruiser hauled up my working jib with the chaffed halyard and of course it was clear to see the problem. Right where I thought.  I know what I need to do. 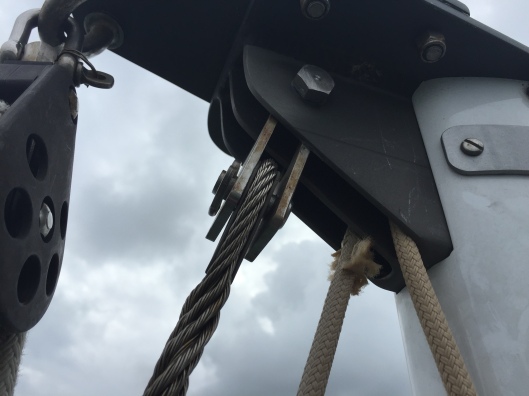 The chafed halyard.  Not good.

Next day, I sent the photo off to Robert so he can fabricate the right kind of hardware to solve the problem.

I was restless. Not too much you can work on when you have a boat with almost no systems. Time to take a drive around the island. I rented a car. A red Ferrari. $30 for the day. Hard to beat a price like that. 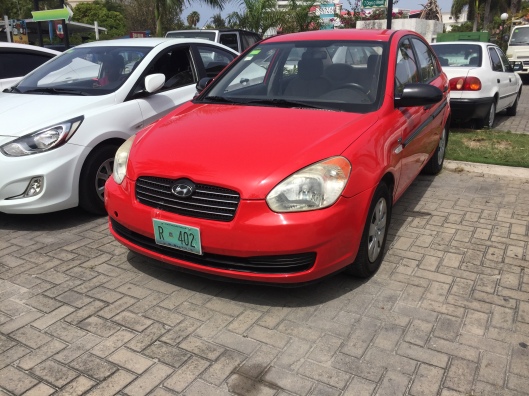 Some people will point out that the rental car is a Hyundai.  Wrong.  It’s clearly a red Ferrari disguised as a Hyundai.

About 1000, under a clear mostly sunny sky, off I went working my way east along the south coast. Over the coastal mountains. Into a maze of streets and slow moving traffic in Philipsburg, the Capitol of Sint Maarten. The part of the town I saw and was snarled up in was beat up and run down. Not worth lingering. I didn’t want hustle and bustle. I wanted space. I drove north climbing and descending a well used winding two lane road. Dirt shoulders. Old houses. Dry parched landscape. I crossed over a wide grassy plateau then the road dropped and twisted down between head high bland colored masonry walls that lined both sides of the narrow road. I couldn’t see anything beyond the edge of the road. Finally, there were quick glimpses through the dry vegetation of a small harbor. At last, the view opened and I had arrived at Oyster Pond on the east coast of Sint Maarten. It’s a tight compact little harbor with a very narrow entrance.  There were plenty of boats and a few restaurants. Nothing spoke to me there. I didn’t get out of the car.  I turned around and drove back out the way I came in then picked up the road north and climbed around the west side of the harbor. I crossed over the boundary into the French side. Just a flag and a sign on the side of the road announcing I was entering another country.  Driving over a hill I had a good view of the harbor so I stopped and took a few pictures. I climbed back into the Ferrari and continued north along the coast. 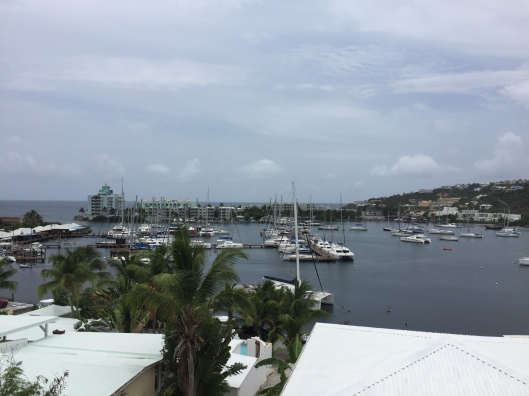 More dry hilly landscape on both sides of the road. Dusty. Tired looking. Eventually, the coast came into view. Oriental Bay. Long and low. Aqua colored water. Low surf. Some white pointed sails on the horizon. Sailors making their way around the east side of St Martin. The road ran northwest along the coast. Very rural. Not much life. The whole place had a somber fill to it. I pressed on. Passed through a couple of compact towns. Lots of bustle. The locals consucting the day’s business. All the building were old. Fading paint. You could tell at one time it was vibrant but it looked like the whole town aged as a single unit. Like a person. Once it was young, strong, vibrant. But now . . . like a middle aged man that made no attempt at staying fit, it was wrinkled, grey, scraggly, dejected, and soft around the middle. I pushed on. I passed an airstrip then drove into the seaside town of Grand Case. Parked the Ferrari in a crowded lot on the north side of the town. This was better. There was life here. Some color. People moving about. I walked down the main street. Cars pushed past. Scooters zipped by. I could see the ocean between low slung buildings. Lots of open air restaurants. The smell of meat being grilled was in the air and mixed with the pungent smell of sea water. People strolling along in beachwear. I was hungry. I walked through a collection of open air restaurants built around the perimeter of a huge wooden deck that had an expansive view of the water and a lovely crescent shaped sandy beach. People laid about. Families were sunning and strolling along the beach. A number of women were topless. The French. Gotta love ’em. Kids playing in the calm clear blue-green waters. 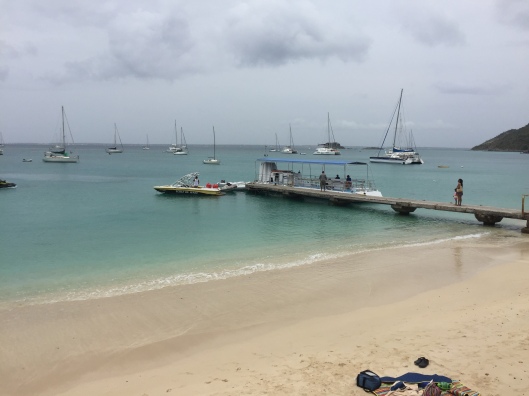 I picked a cafe that had shade and a nice breeze. I got a huge grilled chicken meal for $10. It was wonderful. Great flavors. I felt human again. 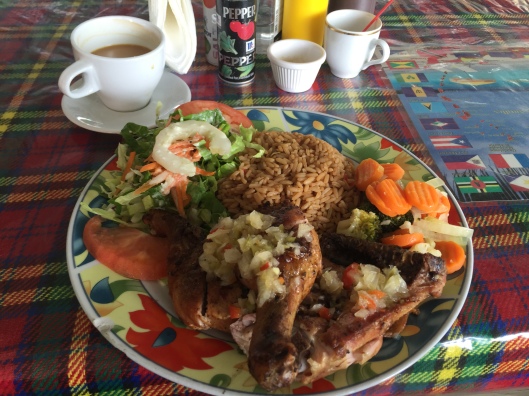 After the meal I wandered down the narrow street. I found another cafe with a balcony over looking the water. I ordered coffee and used the free wifi to check email. The coffee was excellent. I got the bill — $5. What a difference. $10 for a huge grilled chicken meal. $5 for a tiny cup of coffee. 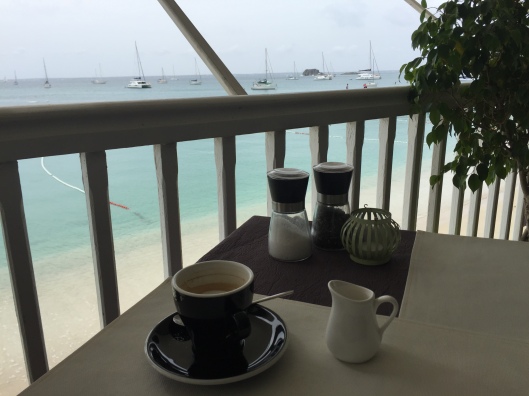 I went back to the Ferrari and pushed on down the west coast. More twisty roads still climbing up and down. No sight of the ocean. Suicidal scooter drivers running down the middle of the two lane road with cars running by on both sides. Young men who knew they were invincible and sure they could beat the odds.

Finally, Marigot Bay appeared. I pulled over on the dirt shoulder on a small hill over looking the Bay. Before me was a bustling seaport town. A crescent bay and many sailboats at anchor in the bay as well as the lagoon. Low concrete and masonry buildings. Lots of telephone and power lines. Not quite picturesque. Marigot couldn’t quite escape an industrial feel. I could see the prominent Fort Marigot on a hill on the north side of the town. Cannons still aimed seaward to fight off Nelson’s fleet. Back when the French were fighters. Before June 1940 when the German blitzkrieg overran the largest standing army in the world in 20 days. 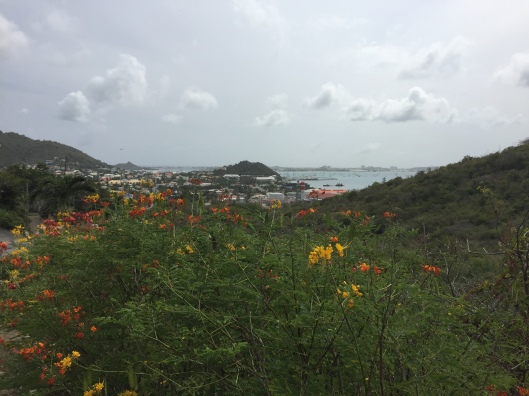 I got back in the Ferrari and drove down into Marigot. A few days before I had paid a visit to the town by dinghy and had walked around. I had a basic feel for its layout, so I knew where I was going. Very busy. Lots of pedestrians. More buzzing scooters. Small cars weaving nimbly through traffic. Lots of shops. Glass display windows. All the shop names and signs in French. Lots of long legged skinny European women. Well dressed. Most carrying shopping bags with their day’s trophies. The well-to-do on display.

I pushed on. The gendarme was visible. On street corners. Body armor and tactical gear. Loaded into parked SUVs. Keeping a watchful eye out. Probably a good thing.

I pushed through the town and over the two lane drawbridge that spans the canal used by boats to enter the north side of the lagoon from Marigot Bay. I sped down the road. Traffic thinned a bit. I saw a McDonalds. The American restaurants have free wifi with the best internet speed. I pulled in. Ordered another coffee. Same small size as the one in Grand Case. Half the price. I checked email. 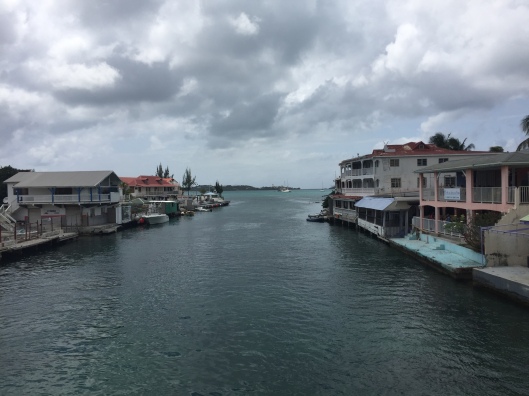 The canal that passes from Marigot Bay into the lagoon on the French side.

I got back in the car. Whipped out into traffic and pushed on down the coast. Flat. No mountains or hills. Very little traffic. I pressed the red Ferrari passed a number of pull-outs for walking access to the ocean but only occasionally got glimpses of the water. I started passing gated resorts. You could sense there was more money here. Still dry and dusty and somewhat drab. I passed through a high end modern looking shopping area. Lots of construction. Chrome and red bricks.  This place was getting a real face lift. No doubt about it. Lots of traffic. I ground to a halt. Finally got spit out and back into a more rural setting. The road twisted again as it passed through the middle of a dried out parched brown golf course crying out for water. I saw no golfers. There were families strolling on asphalt sidewalks and a number of people riding bicycles. The airport loomed ahead. Serious traffic. Bam. Grid lock. Took about an hour and a half to make it past the airport. I entered the round-about near the east end of the runway and crossed east over the causeway that spans the lagoon. The same lagoon the Far Reach is anchored in. I looked to my right. There is my girl. Nestled between a dozen large modern cookie-cutter monohulls and a couple of big boxy cats. Though smaller than all the other boats she stands out. A small yet beautiful swan. Folded wings. Floating patiently. Waiting.

I was carried along with the traffic down the north east side of the lagoon. Past more shops. The massive ACE hardware store went by in a blur. Past the chandleries. Back to the Simpson Bay Marina parking lot.  I parked the car and gathered my gear. The car rental agency was closed for the day.  I strolled through the marina shopping area, past the open air bar and down to the dinghy dock. I fired up the outboard and made my way across the very still water of the marina. As soon as I entered the channel I opened the throttle and the dinghy leaped up onto plane. We cruised along in the dimming light. The water was flat with only cats-paw ripples on the surface. The air was rapidly cooling. Skimming over the lagoon at 20 knots was a fine way to punctuate the end of the day. A mantle of freedom was being wrapped around me. I saw the Far Reach ahead and easily maneuvered the dinghy along side. I killed the engine and reached out and grabbed the bulwarks. A sailor’s timeless embrace of his girl. Repeated millions of times over thousands of years by sailors all over the world. 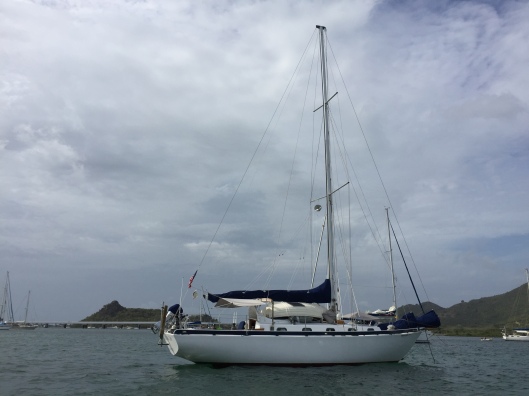 The Far Reach, in the Lagoon, Sint Maarten.  The prominent hill just to the left of the stern of the Far Reach is known locally as the Witch’s Tit.

I enjoyed the day but my mood was guarded and a little somber.  I was glad to be back on the Far Reach.  I am anxious to get going. Back to sea. But first things first. Fix the halyards.  Then we can sail.