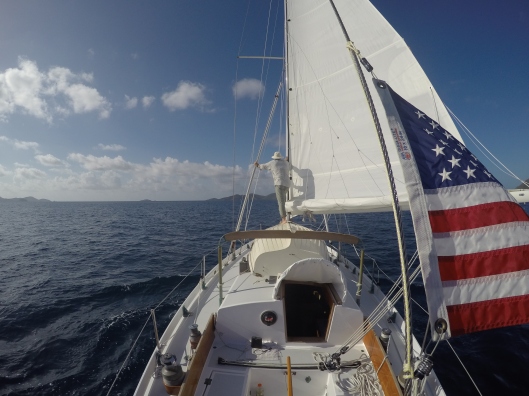 After years of hard work I can finally say it was worth it.

We awoke to a very light north easterly wind at our anchorage off Fort Burt in Roadtown, Tortola BVI. While we were drinking our coffee, two huge cruise-liners entered the harbor. The first was a dark blue hulled

Disney cruise-liner complete with the Mickey-mouse ear silhouettes on the stacks. The other was similar in size but white. They both maneuvered, without tugs, turning 180 degrees using some kind of bow and stern thruster system. They slid in stern first along the quay pretty as you please. No drama there. Very slick.

Meanwhile, the John and Tricia show was about to get underway as we finished off our coffee and I ratcheted in about 200′ of 5/16″ chain with our manual windlass. We were underway at 0820 sailing to the WSW in the light but building easterly breeze. The weather report called for 20 kts of winds so we sailed under reefed main, working jib, and stays’l saving ourselves the trouble of  later reefing. We slowly made our way west along the south coast of Tortola. Eventually we were sailing a very broad reach making about 4 knots. The sun was up in all his glory and he was flanked by a growing number of cumulus clouds.

As the wind continued to come more aft, I decided to set the whisker pole and because I had not used the new continuous line system under working conditions we had a few hiccups, but we eventually got it sorted out. And it was marvelous. We were able to sail a very broad run with the main out on the starboard side and “prevented” to reduce the likelihood of an “unplanned” gybe. The forecasted 20 knt breeze showed no sign of arriving so we handed the stays’l and poled the working jib out to port sailing wing and wing. The Cape Horn windvane held a nice course as we sailed for glory. We had the Bose speaker on deck and I plugged in my iPod and selected the playlist I used when I was deeply ensnarled in all the years of what, at the time, seemed like a never ending rebuild. As we sailed down the coast with the stunning scenery all around I was struck by the realization that most of my time listening to these songs had been while I was grinding fiberglass, fairing epoxy, sanding wood, varnishing, painting, or just dreaming about someday. But now it was someday and the Far Reach and I were sailing through these beautiful islands in the Caribbean while these same songs were now making me smile. It all felt very “worth it.”

With the wind about 12-15 knots from our stern and still wing and wing, we sailed into “The Narrows” between St John and Great Thatch Island. It was glorious sailing. Tricia lay on the side deck in the shade looking up at the sails and mast as they scribed a slow back and forth orb across the blue tropical sky. I stood on the lazerette with a hand on the backstay and took it all in.

It was finally “someday.”

We eventually made it to the north west corner of St John when we were approached by a large dark hulled mega yacht named the Phoenix 2 with a gigantic platinum colored eagle head jutting out forward of the bow. I mean a huge head as in maybe 4′ tall and 5′-6′ long. The ship–and it was a ship make no mistake about it– was flanked by three or four matching high speed ribs helmed by young men wearing matching kaki pants and dark blue shirts. The RIBs came roaring around its starboard side in echelon formation to take up station between the Phoenix and the highly threatening Far Reach. A Roberts helicopter swooped in to have a look at us and then continued to circle around the ship as it steamed off towards the BVI. I wondered if Goldfinger might send over one of his hinchmen to tell us we would be expected to join him for dinner at eight PM sharp. But alas, an invitation never arrived.

We worked out way to the east of Two Brothers Rock in a faltering breeze and in fact almost came to a standstill against a strong current. We shook the reef out of the main, dropped the whiskerpole, raised the staysail and powered up on to a close reach. About 1300 we anchored off of Cruze Bay, St John and took the dinghy in to clear in through US Customs. We were interrogated by a not too friendly agent. I think she was just not happy to see some American citizens return home. I didn’t care.

We stopped by the National Park Service office, picked up some maps and received some great park information from the friendly park Rangers.

The St John’s Island is about 2/3s US National Park. There is no anchoring. It’s almost all mooring balls and $26 a night, thank you very much. Welcome home to the land of rules and regulations. They are trying to protect the reefs and Eco system and the policies they have implemented probably make sense. There are also are hiking trails and beautiful beaches on the island. I do hope to come back with my family and enjoy what I am told will be a less crowded, though more expensive, experience than the BVI.

We made it back to the Far Reach about 1600 and used the dinghy as a yawl boat to power her over to one of the morning balls. And that was that. Tomorrow, we head to St Thomas to get Tricia staged for her flight home.