My 13th Day at Jost Van Dyke. I have spent the last 8 days helping out Ali Baba on whatever projects he has lined up. Painting, helping run wires, building a booth for the New Years festivities, etc. I have really enjoyed working with Baba and getting to know him and Urinthia. They have fed me and engaged me in interesting wide ranging conversations.  I have learned a little about Island culture and got a peek or two about what goes on behind the scenes.  I have traveled all over the world yet never cease to be humbled by the kindness so many people extend to people they barely know. There is nothing that demonstrates how we are so much more alike than different like foreign travel especially when you engage outside your own community and culture. 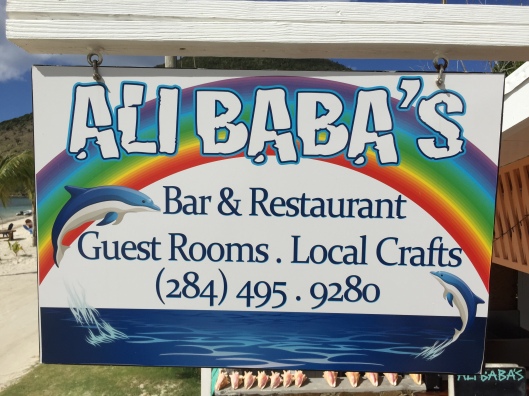 I’ve known Baba and Urinthia for three years.  If you want disco and loud music Foxy’s is the place to go.  But this is where the best food is on JVD.  It’s a great place to bring a family or a friend and have a slow meal and a long conversation. And Baba also has a fantastic and diverse play-list loud enough to hear but quiet enough not to interfere in conversation.

A local fisherman came by the Far Reach in his skiff early Christmas morning.  He brought me tender spicy pork, two kinds of home made bread, watermelon, and even a mug of hot coffee!  He asked for nothing in return. What a generous thing to do. I was, and continue to be, humbled by the kind and giving nature of so many of the local people.

A Christmas morning gift from Mr Sing. The spicy pork was fantastic. The homemade bread delicious. The watermelon and coffee perfect.

I celebrated Christmas morning with gifts Gayle had managed to sneak aboard the boat before my departure on 3 December. She even included a small Christmas tree.

With 26 years on active duty I have spent many a Christmas deployed.  Gayle knows how to make sure I don’t miss out.

I attended the Christmas Day service in the small temporary church on island, a replacement for the one destroyed in Hurricane Irma.  I was warmly welcomed and moved by the sermon delivered by a local priest on “What is the meaning of Christmas?”

I attend a beautiful service in this church three years ago, which I previously wrote about. It was destroyed by Hurricane Irma. The services are currently held in the Fellowship Hall. It’s the low yellow building to the left in the photo.

I also continue to meet interesting charterers and long term cruisers. If you take the time to introduce yourself it seems almost everyone has a great story.

This sweet little guy is a charmer. I’m sure he has a great story too!

After 12 days, my wonderful anchor spot finally revealed its ugly secret. Ashore and talking to Gayle on the phone I looked up and the Far Reach was gone! “Gottagotheboatsgone!” I ran down the dock, leaped in the Sweet Pea and pulled on the oars like an Olympian. The FR had dragged about 150’ from the 8’ of water she was anchored in (with 45’ of chain) into water with a depth of about 40’. She dragged back between two charter cats. Their crews, eating lunch on the stern decks, were oblivious. Fortunately, she never made contact with any boats.

I jumped aboard got the engine lowered and running on the first pull—hooray Honda! Worked the windlass like a crazy man and had the anchor at the bobstay in record time. It took about 10 attempts and close to 90 min to get the anchor reset.  Several times I hovered over the anchor with a mask and snorkel and just watched the anchor slowly pull back through the white sand. No good. Turns out there is a limestone shelf below the sand so the 45lb spade slid right off. But, I finally got her hooked up and spent an awful night watching for dragging.

Baba told me he thinks maybe Hurricane Irma thinned the sand out behind the reef.  I have a couple more days to complete the projects I am working on. We have bad weather forecasted—30 to 35 kts with gusts to 40 for next couple days. So, I did what I almost never do…I picked up a mooring. I had to dive and inspect three before I found one whose line was not chafed badly below the ball. Mooring here is expensive for the long term sailor. But sometimes you have to live to fight another day.

Unsettled weather beginning to arrive. The Far Reach is between the two cats in the center of the photo.

Some charter boats came in and tried to anchor on the same shelf upwind of me. I rowed over and explained it was not a good anchor spot. With the forecasted winds they were certain to drag. I recommended some places that I thought had good ground but was deep…places I had personally anchored before. To their credit they moved. A sailor from Argentina approached me ashore the next day.  He said “you were right.”  He told me he thought he would be OK if he put out a second anchor, which he and his son did.  But the anchors would not hold.  He moved his boat to a better spot and thanked me for saving him from what would have been a miserable night. Sailors taking care of sailors.

The unsettled weather arrived last night. Calms intermingled with crazy blast of winds from different directions. Shorts bursts of rain. The Far Reach sheared suddenly to port them to starboard.  It was an unnerving feeling that many sailors have experienced.

The rain squalls and crazy muti directional blast of wind arrived.  Not fun but, nonetheless, part of the journey.

I’m going to be here till probably 30 December. Not where I planned to be for so long. I have done New Years at Jost Van Dyke before and while the activities ashore are fun there are just too many boats in the harbor. So as soon as the winds moderate I plan to slip out and head for St Thomas.