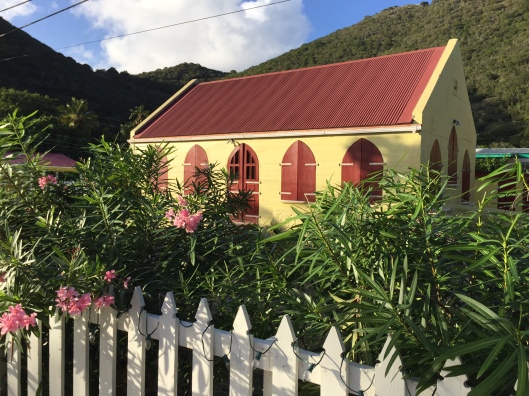 The harbor was filling up fast on New Yers Eve. 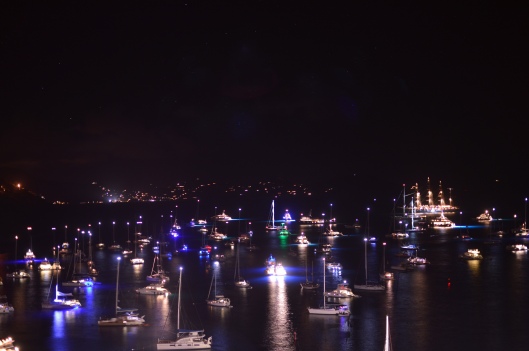 The Far Reach, Anchored, Jost van Dyke–31 Dec 201–The Far Reach has been anchored in Great Harbor, Jost van Dyke for about a week. We sailed in looking for a tranquil place to spend some time to nourish body and spirt after our 2 1/2 week upwind bash from Cape Lookout, only to learn that our exact location is the site of one of the largest New Years Eve’s beach parties in the world! We must have been the only two sailors in the western world that did not know what seems to be near universal common knowledge. We thought about leaving before the boats descended on us. Truth be told, without an engine, we got boxed in. When we dropped the hook we were outside every boat save one. Quickly, we had a dozen boats gathered round us blocking previously easy routes of egress. It was like being under blockade. We came up with a strategy to sail out between some big yachts but finally thought what the heck, let’s not fight this. It might be an interesting experience. So we stayed put. And, we met some wonderdul people. Other cruisers of course, but locals too.

The highlight, without a doubt, is the Methodist church service I attended on 27 December. What an experience. There were only four non locals, including me, in attendance and one helps out with the local school for several months each year. The church was packed. The big barn-door style window were swung wide to allow the tropical breeze to blow through. Almost all in attendance were local women in their brightly colored dresses and marvelous hats accompanied by their very well behaved smiling children. What a service. And they sang their hearts out. I’ll never forget the soaring soprano voices and beautiful West Indies accents covering many familiar spiritual hymms. It made the hair stand up on my neck. The rest of the week it felt like I was received a little more warmly than before. And Tricia and I are definitely known here since it seems common knowledge that we are brother and sister which is viewed as pretty unique.

On 29 December we took on 74 gallons of fresh water from the local fuel dock topping off our tanks.

On 30 December, I helped Emma, a fascinating Scottish single hander sail her 37′ sloop, Carpe Diem, over to Nanny Key, Tortola which gave me the opportunity to conduct a reconnaissance of the Thatch Island Cut and west end of the Drake Channel. It was another upwind bash in the BVI 25 knot Christmas Winds. I keep waiting for the legendary downwind sleigh-ride in the trades I have read about all my life. Ha!
On the upwind slug we crossed tacks with the gorgeous wood schooner Juno from Vinyhaven, Maine. I’d previously only seen her in WoodenBoat magazine. She was stunning. She sailed up wind with her forestays’l and a double reefed main. She pointed higher than we did in Emma’s fin-keeled  Jeaneu 37. She went up wind like a locomotive. In no time she was gone. It was an incredible site to behold.

Once we arrived at Nanny Key I stopped in at the Budget Marine and bought a 2 stroke Tohatsu 9.8 short shaft for the inflatable I purchased and stowed aboard the Far Reach before we left North, Carolina. I then rode the ferry with my new outboard back to Jost van Dyke. I love rowing Sweet Pea, our 9′ Fatty Knees punt, but I thought it would be fun to give my soon to be 16 year old twins a car for their 16th birthday — a dinghy car so to speak.

Tonight, the scene here is unworldly. There are about 150 boats anchored in Great Harbor. The night sky is filled with anchor lights that make you feel like you are looking out of the center of a galaxy of stars. Music is wafting out across the water from a dozen beach bars–Corsairs, Ali Baba’s, the A&B, and of course the legendary Foxy’s.

Tomorrow, we hope to sail out and maybe spend the night one harbor over at Little Harbor. Or maybe push on a little further to Cane Garden Bay on the west side of Tortola.