The Far Reach about 24 hours before Florence made landfall.

I am very happy to report that the Far Reach survived the trial of her life during Hurricane Florence, which pounded eastern North Carolina from 13-14 Sept 2019.

We prepared her for four days then moved into the BOQ at Marine Corps Air Station Cherry Point—the marina is on the air station—to be able to have access to her throughout the storm. If we remained at home we would be cut off from her as we expected the base to close and the roads to be blocked with high water and downed trees.

On Friday morning, after a long night of howling wind and lashing rain, Gayle and I made our way to the turnoff to the marina. The road was completely blocked. 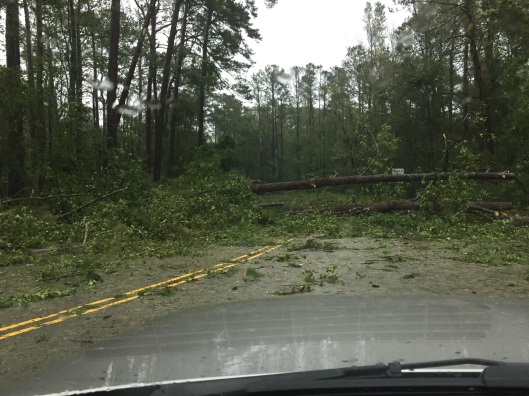 The road to Hancock Marina was blocked with fallen trees.  We walked the last quarter mile.

We walked the last 1/4 mile in our foul weather gear crawling over a half-dozen fallen trees in the pouring rain and 40 knots of sustained wind. The first boat I saw was a 34’ sloop standing upright on her keel in the parking lot. Another boat was up on our dock blocking access. Several smaller keel boats were on the dock as well. I could see three boats sunk in their slips. My heart was in my shoes. Finally, I spied the Far Reach gallantly pulling at her dock lines in gusts up to 60 knots. I didn’t know whether to cry or jump for joy. 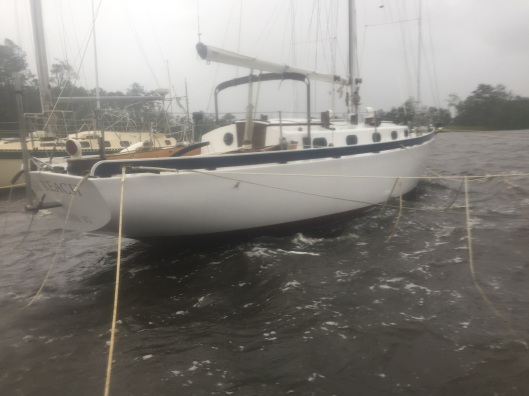 The Far Reach immediately after the worst had past.

She was essentially the only boat of 27 boats to suffer no damage. Four boats, all over 34’, were sunk. Five were thrown up on the docks, the rest damaged from minor to significant. A number of boats not sunk have since been totaled. Evidence indicates we had 6’ of water over the top of the docks for a surge of 10’+. The tops of all the pilings were certainly under water. We sustained hurricane force winds for hours and hours. We worked hard to get her ready but also had plenty of luck.

A Columbia 9.6 on B-Dock. We had a boat sunk and several totaled on B-Dock.

A-Dock did not escape either

We were not as lucky with our home but faired much better than many of our friends and neighbors.

I am currently writing an article detailing our experience and lessons learned for BoatUS Magazine. I am told it will be published next summer.